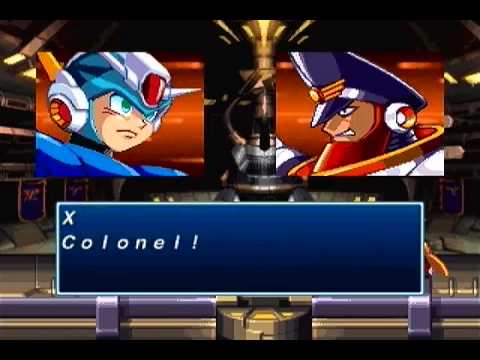 This time with better quality than that shitty one I have uploaded.

Using X Collections to play through Mega Man X4 The volume may be a little loud. The initial recording had low volume.

I just realized that this one is actually a pretty good Mega Man game, sans the lulzy voice acting (especially X)
Throughout the run:
-Dash and jumping
-Boss weakness abused for the first time through. At boss redux, I do a buster beatdown-weakness abuse thing.
-A few deaths here and there

Web Spider: easy stage. I get the boots upgrade and I don’t sit still. “Negotiating”…what?

Split Mushroom: death at the area with the Heart Tank. Was trying to get to it. Wasn’t thinking. Abused weakness.

Cyber Peacock: bumrushed the hell out of the first part. Soul Body makes it LOL to get S Rank. Helmet upgrade makes the game easy due to infinite Weapon Energy. Cyber Peacock running into me. -_-

Magma Dragoon: bumrushing. Didn’t opt to use Ride Armor against Dragoon. Fun fact: localization used “Irregular” on the boss intro. “Irregular” is what we know as “Maverick”. After completing the stage, I head to Web Spider’s stage to get a Heart Tank.

Frost Walrus: Cameos from two bosses. Took top path because. Backtracked a bit for the Heart Tank. Abused Rising Fire on mid-boss. Everything was straightforward in the second part.

Jet Stingray: Land Chaser stage. Still remembered on how to get the Heart Tank (been like almost 2 years since I played this game.) On the second section, Jet Stingray was being an ass while I was trying to net the E-Tank, which I did without dying. o_o “Yeaaaaaaaaaaah!”

Space Port: straightforward. Wanted to use a few special weapons, but Twin Slasher (my favorite) wasn’t getting the job done. So much fail on Colonel. It is Frost Tower’s fault. Shit’s hard to use.

Final Weapon 1: First section is straightforward. Double fight managed. Weakness is Double Cyclone, but that will only make shit worse. “Destroy! Evil slash!” For the second section, I take the top path. Apparently, the General has a weakness: Twin Slasher. I found out REALLY late that charged Twin Slasher goes through things. -_-

Final Weapon 2: Had distractions, so that is why the E-Tanks are empty. -_- (and this could’ve been in one part, but nooooooo). 8 boss redux. Buster beatdown with some boss weakness abuse. Showdown with baldy (I like X4’s Sigma. Dat scythe.) At Sigma 1, Rising Fire HAS to be abused. “Are you ready for round 2!?” Simple AI and made the scythe get stuck on the walls. At Sigma 3, I was failing so hard. It’s the weakness, man. For the “Gun Sigma”, his weakness is Soul Body, but is pretty hard to hit with. For “Head Sigma”, Ground Hunter is his weakness, but it is sometimes hard to use (especially the attack that sucks…literally.)